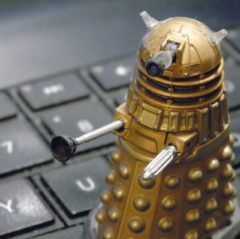 A tradition for many years of my childhood was to spend Saturday afternoon firmly planted in front of our television to watch the weekly broadcast of Doctor Who on our local public station, entranced with the adventures of my favorite Time Lord and his companions.  Over time, it got harder to find the show as airings of episodes locally declined and I had to expand my knowledge of the program through Target novelizations or even braving some winter nights out in our shed watching fuzzy images from further out stations on an old black and white antenna TV.  Never would I have thought that the show would resurge in popularity to the point that eventually all the existing classic episodes would be easily available to buy and view again and again as much as wanted. I gladly own and have seen them all now, so I figured it was time to join the (surprisingly large) bandwagon of fans who have gone through a viewing of the show story by story in order, blogging their thoughts along the way.  It won’t be anything astoundingly new but feel free to follow along as I highlight some of my favorite quotes and moments from the show’s start in 1963 to the end of the classic era in 1989.